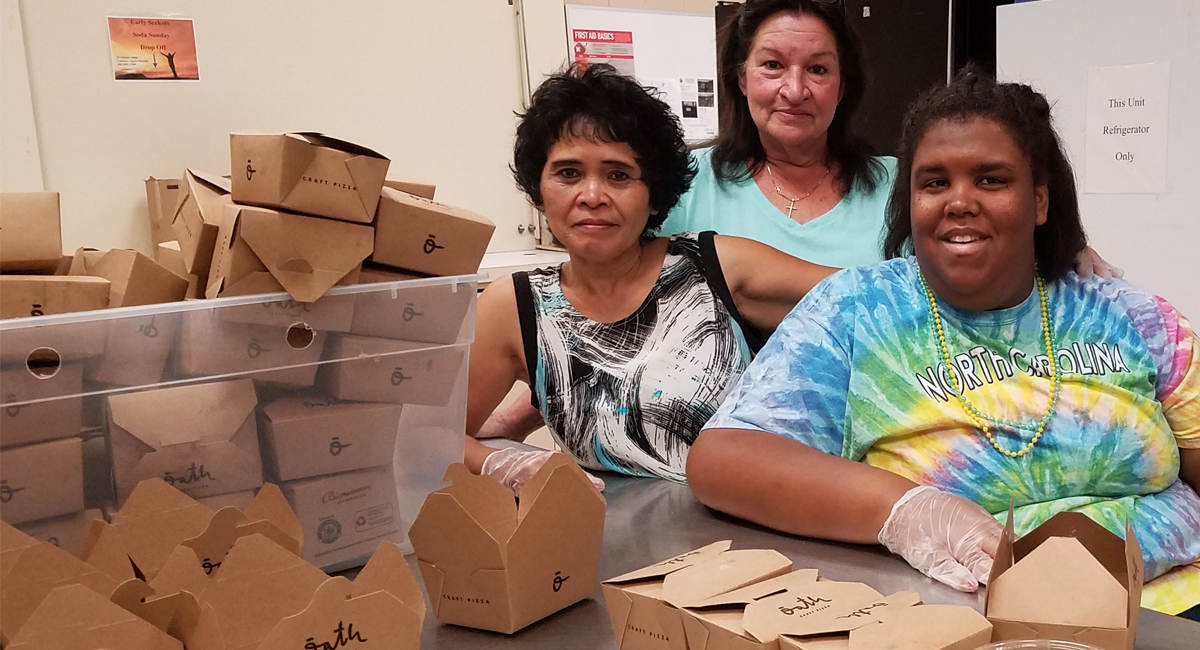 Making a Difference, One Box at a Time at the Rhode Island Dream Center


As cars pass by one peaceful, sunny afternoon, the Praise Tabernacle sits proudly on Park Avenue, its gardens still green before the coming autumn cold. Inside is quiet, serene--where a few Praise Tabernacle officials discuss and manage their duties for the week outside regular sermons. But in the back, the kitchen hums with activity as three volunteers from the RI Dream Center prepare packages of food. Those volunteers are RIDC member Cindy, Perspectives Direct Support Professional Susan Lizarda, and RIDC volunteer Shyona!

The RIDC was founded in 2010 in an effort to bring relief to populations in RI that struggle with homelessness and other challenges, and for nine years, they've done just that. Over a table of cake, the three RIDC volunteers enjoy the peaceful environment of the Tabernacle, as well as the rhythmic, focused work that they know will bring much needed relief to their community members later on. With donations from stores such as Stop and Shop, Calvito Bakery, Blount, The Thirsty Beaver, and various other vendors--all of which donate items like pizza, packages of chips, soup, and other food--the nightly food truck operation in Kennedy Plaza will be stocked thanks to these generous community members and the RIDC volunteers.

"The RIDC run all kinds of events, like golf tournaments and galas, to help raise funds for the RIDC," Cindy explains. "We always have lot going on, and we're always happy to have more hands on deck."

Food isn't the only thing to be donated, either; Cindy, who has been volunteering with RIDC for five years, also notes the distribution of clothing, coffee, lunches, and other resources to individuals in homeless shelters. As Sue opens the door to the Praise Tabernacle's clothing closet, she has nothing but praise for both the Tabernacle and the RIDC--especially as the Praise Tabernacle offered this space for RIDC to do such work alongside their own community events. Sue has been volunteering with them since before she came aboard at Perspectives, and still believes in the mission wholeheartedly.

"I think it's important work," she says, "and it's a relaxing environment that the individuals I support love. They enjoy giving back to their community, and we have fun doing it, too."

Shyona agrees. Over the boxes of cake she assembles, she remarks, "I like it here; it's good work. Working with Susan is fun."

Volunteers gather Tuesday and Friday--including Cece, Sarah, Bryce, Chris, and Lynn, who all do their own tasks at the RIDC; Lynn, for instance, is a master at organizing the food pantry's many boxes of donations. As well, during their lunch break, they'll walk to Subway together and enjoy the sunshine as they eat in the park across the street; they all love the company and the pride of a job well done. So well done, in fact, that the RIDC even sent a letter to the volunteers thanking them "for volunteering their time and energy in helping the Rhode Island Dream Center." In the letter, Shyona, Cece, Sarah, Sergio, Bryce, and Morgan all received a special shout-out for continuously doing their parts exceptionally well, noting their politeness and wonderful cheer.

Cindy says with a smile, "It's great working with everyone; we really enjoy having them. Everyone's friendly and happy to help, and we appreciate their help so much."

The volunteers continue their day, smiling all the while as they make quick work of all the donations for the nightly food truck service. Theirs is a cause they truly believe in, and their commitment to that cause--as well as the camaraderie they share with each other--only adds to the Praise Tabernacle's peaceful, friendly atmosphere. If you're interested in joining the RIDC and contributing to their mission, you can learn more about them at their website!
Making Career Moves for a Great 2022 with Patience
Transforming Experiences into Paid Positions: Jacob's New Job
Taking Charge of Virtual Safety, One Class at a TIme
The Career Worth Coming Back For at Perspectives
Where to Find Dedicated, Talented Employees for Your Business