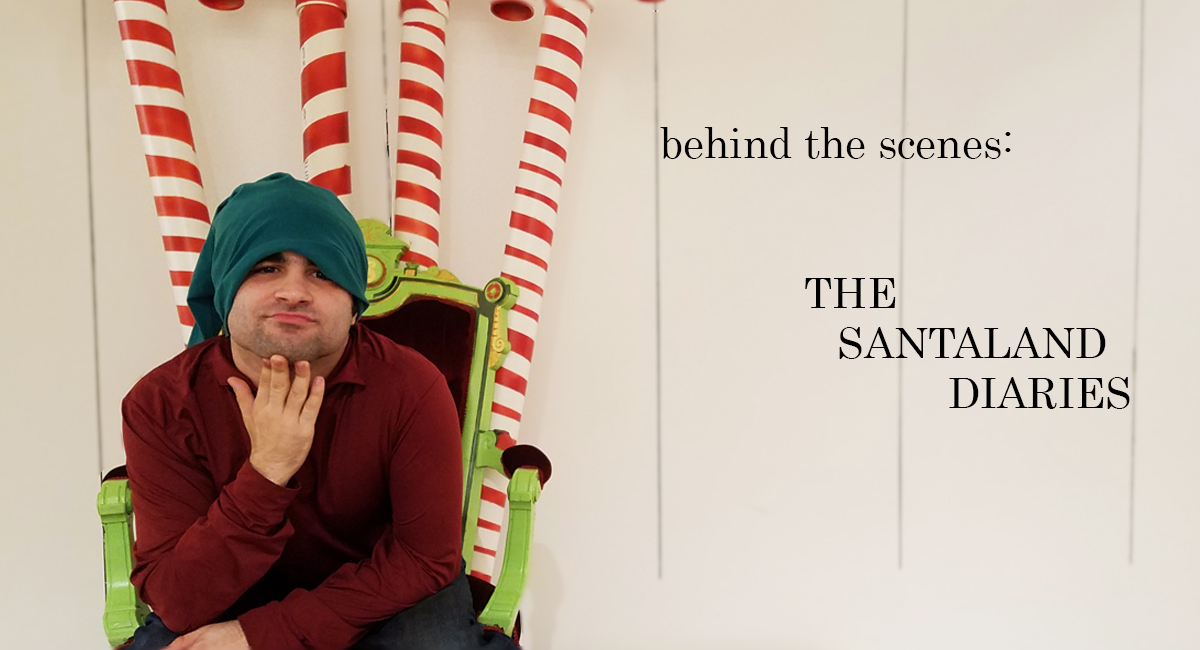 Building Holiday Cheer in the Providence Place Mall: Behind the Scenes of THE SANTALAND DIARIES


The twinkling lights and ornaments hang between the floors of the Providence Place Mall. Already, dozens of people go from shop to shop, thinking of their family and friends as they brainstorm potential gifts. But beside Boscov's on the second floor is an inconspicuous space, tucked away from the noise and the lights of the mall; it isn't a storefront, this single door, but rather an entryway to a winter wonderland in the making. Here, the Spectrum Theatre Ensemble (STE) prepares for its latest neurodivergent production: The Santaland Diaries, written by Dave Sedaris and adapted by Joe Mantello!

Spectrum Theatre Ensemble (STE) is a local theatre company and 501(c)(3) non-profit group, started by Artistic Director Clay B. Martin in 2017 and developed in partnership with Trinity Repertory Company through grant funding. Their mission is to create an environment where individuals of all abilities can pursue theatre professions and safely express themselves on stage. After the incredible success of STE's first production over the summer, this diligent crew has been hard at work preparing for their holiday production. Earlier in the autumn, the crew reached out to the Providence Place Mall for any free space they might use for the show, and they were offered a wonderful spot to rent right beside Boscov's, a department store selling home goods, clothing, and other items.

Boscov's has been a wonderful sponsor to the crew, donating both funds for the production and other materials, like chairs and drapes. Their first performance will take place on Black Friday, and already, the set is coming to life, thanks to the professionals from Red Fork Empire consulting with STE's set designer, Katherine Niedzwiadek, and her assistant designers Alex Sprague and Megan Ruggiero, to create wonderful set pieces, like the candy-cane throne, the fireplace with a built-in portrait projector, and a toy land installation for the performance pre-show.

"This production has been another huge step for our company," says Artistic Director Clay, "and it's amazing how much growth we've seen, for the whole crew, from a one-man show."

Such growth includes collaboration with several of STE's partners, including Red Fork Empire and Boscov's: Empire Revue, who is providing original music, West Bay RI, who provides rehearsal and office space, and the incredible support of sponsors like Stephen Prone of the Prone Family Foundation, who donated a signed Tom Brady jersey for a fundraiser raffle that will also be showcased in sports bars throughout southern New England for the duration of the play. The generosity of the community has truly propelled this production forward, as well as the assistance of family and friends, who contributed pieces to the toy land exhibit and, in the case of artist Cesar Franco, painted a fantastic mural for the show.

Four actors, Adam Bram, Kevin Broccoli, Daniel Perkins, and Mark Wilburn, will perform the role of Crumpet, a department store elf, who will tell the tale of working in a mall during the Christmas season. A prologue will also be presented by a separate actor before the main show. Rehearsals started at the end of October, and the actors put their whole heart into every run as they work to perfect the role. Daniel, who has always wanted to star in a Christmas production, recently appeared at Rhode Island Comic Con dressed as Crumpet to promote the show. His dedication to the role has led him to read other works by Sedaris in preparation, and he's drawn on the retail experience of his friends and family to further fuel the tone of his character.

"I'm really, really pumped for this," says Daniel. "The challenge of a one-man show--making sure every piece of it is on point and delivered organically--has been amazing for my growth as an actor. I've waited for this for a year, and I'm ready to perform!"

Dan Boyle, neurodiverse founding member of STE, is working on this production as the Stage Manager alongside Artistic Director Clay Martin and Assistant Director Javier Aybar. In this role, Dan takes stock of every rehearsal--from the technical props, lights, and sound cues to the original flair the actors incorporate into Crumpet--to ensure the quality of the play is top notch in all aspects. This responsibility requires him to know not just one character's lines, but the whole performance--and it's a role he's been more than happy to take on.

"Being the Stage Manager is a lot of responsibility, but it's been a wonderful experience." Dan beams as he says, "I'm excited; I think [The Santaland Diaries] will be an excellent show, and I can't wait for the public to see it!"

Looking for a fun night out with your friends, or an awesome way to take a break from your Christmas shopping? Definitely consider heading to the second floor of the mall for this seasonal performance! This production is for adults only, and it's sure to provide a humorous, insightful take on the retail realities of the holiday season. For more details, check out the event on STE's Facebook page, or head over to their website to grab your tickets! Here's to another fantastic production for this incredible local theatre group!