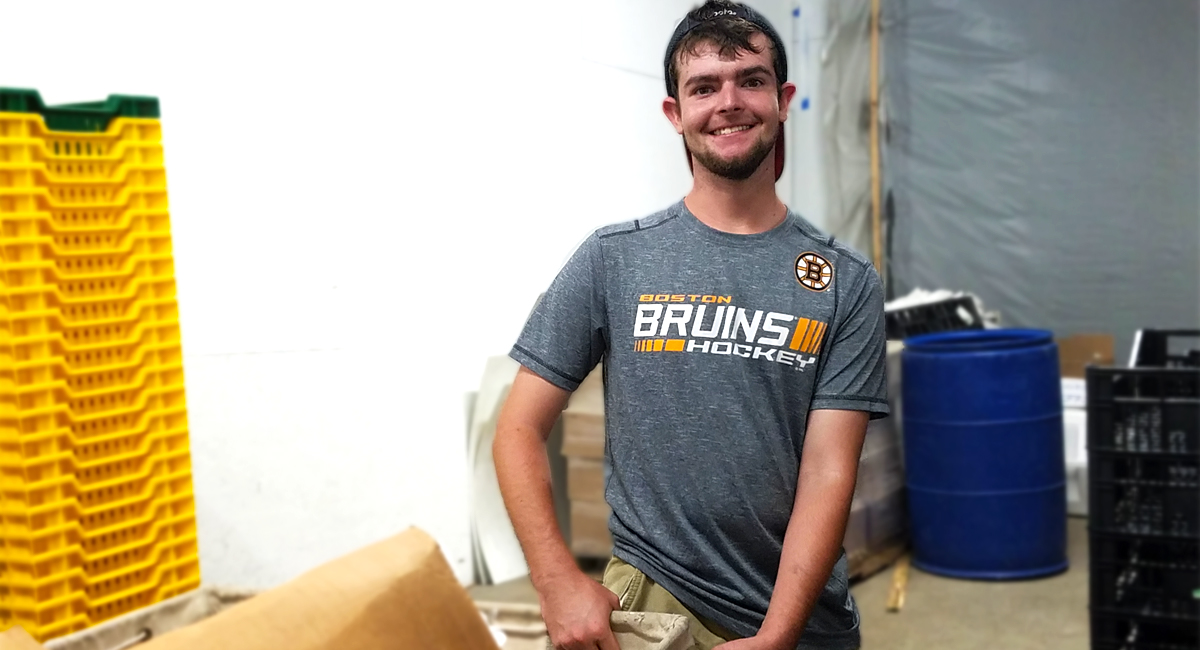 The Growth of a Green Thumb


Whether a topping for homemade pizza or a stuffed appetizer for a party, the mushrooms found in the supermarket have many uses for culinary projects at home. But before they reach the supermarket, packaged and ready to cook, they need to be grown and shipped out--which, thanks to the Rhode Island Mushroom Company, happens right here in our state. Golden oysters, crimini, shiitake--the company grows all manners of mushrooms for our local supermarkets and restaurants, and with the crew is an amazing team player: our friend Clayton!

Since October, Clayton has been working alongside the crew at this local mushroom company, originally volunteering one day a week. He made his match with the company through Perspectives Corporation's Transitional School Services, which supported Clayton in discovering his career interests throughout the year. Over time, Clayton built his relationship with the crew, growing alongside the company itself as it expanded--and over the summer, he was offered a paid position.

"It's really nice here," Clayton says. "I especially like getting to do the power washing."

Clayton also spends his shifts working with the mushrooms in the grow rooms, as well as packing them up and cleaning the crates. His work directly benefits our local stores and shops, supplying fresh mushroom varieties for people's favorite homemade and restaurant dishes. It's something that brings him a sense of pride--a well deserved one, at that!

Clayton's supervisor, Ariel, beams as she notes, "Clayton has been absolutely incredible. He's learning and doing more every day, and his personality is awesome--always happy to be here, always cracking jokes. Whenever I'm having a bad day, just seeing him makes me feel better right away."

So well has Clayton connected with his coworkers--ones that have been hired before and after him--that they've become fast friends excited and ready to help each other every day. Their friendships also extend outside the workplace, as Ariel has also invited Clayton to attend her wedding in the coming fall. It's certainly something to look forward to, and he's very excited to celebrate her special day!

When not working on the mushroom farm, however, it's easy to see where his match with the company came from: Clayton is a true outdoorsman. He spends his time going hunting and fishing with his father, harvesting home-grown produce from the family garden, and fixing up tractors in his spare time. He also loves to golf, training hard for the Special Olympics golf tournaments. With his green thumb and his steel work ethic, Clayton agrees that a job growing and harvesting mushrooms is a great fit!

"I'm happy here," says Clayton. "It's a really good job, and the people are super nice. I plan to stay here for a long time."

With a cheerful, dedicated employee like Clayton, there's no doubt that the team at Rhode Island Mushroom Company will stay doing an amazing job! The work they do for their local community is invaluable, and the energy this team player brings to the table is truly admirable. Way to go, Clayton!